Emily Addams is the last person you’d expect police to be circling in a poisoning investigation. A professor of women’s studies, a foodie, and a doting mom, Emily has spent her life building a campus community and engaging in peaceful struggles against injustice. But when Peter Elliott, a Professor of Plant Biology at her bucolic Arbor State, is found comatose in a pig pen clutching a piece of Emily’s corn bread (unmistakable for its goat cheese and caramelized onions) it’s in her direction that the police turn. 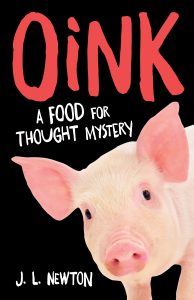 At the same time she comes under suspicion, Emily and her comrades in Women’s, American, and Ethnic Studies are fighting the administration’s attempt to defund their programs and run their beloved Arbor State more like a corporation than a place of higher learning. Her efforts to save her own skin and to protect the campus community she loves converge as Emily launches an investigation to find out who really slipped the professor a piece of piece of cornbread spiked with pesticide.

She discovers that Peter—whom she had seen argue for corporate ownership of seed stock at a recent panel on GMOs—was knee-deep in secret corporate funding for his new strain of genetically modified corn. An inveterate philander, he also betrayed two of his women students and his highly accomplished wife. And if that’s not enough, Save the Fields, a militant anti-GMO group, has had him in their sights. As always, Emily turns to food and cooking for solace, community, and pleasure. Each chapter of Oink: A Food for Thought Mystery ends with a sumptuous recipe for a dish that turned up in the preceding pages. 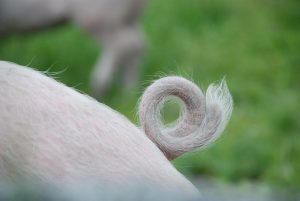 Ready for a cozy yet suspenseful mystery?  Culminating in a twist as curvy as a pig’s tail, Oink: A Food for Thought Mystery is at once a sly send-up of the corporatized university and a reminder of why community belongs at that heart of human life.