I became interested in mystery sometime in the 1990s when I began reading Tony Hillerman, whose sleuths are two Navajo policemen. 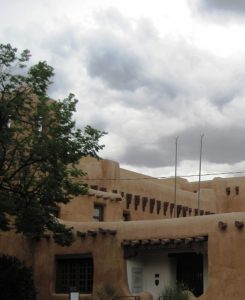 What I liked about Hillerman’s books was that they dealt with social issues—the ongoing colonization of Native peoples—and that they presented stories from the points of view of people on the margins.  I was especially drawn to Hillerman in the 1990s because I saw myself as living on a different sort of margin at my university.  I was director of women’s studies, the faculty of which I had worked to make half women of color, and I and my program had formed deep personal connections with faculty in the four ethnic studies programs.

This community building took place, however, just as a newly prominent national development (often referred to as “the corporatization of the university”) had begun to make our already marginal positions less secure. With its ever greater focus on profit, my university administration was threatening to defund our programs.  In the end, I am happy to say, the administrations’ very efforts to do away with women’s and ethnic studies prompted the faculty in these programs to form an even more tightly-knit community and to fight successfully for our survival.

When I began to write Oink, I followed Hillerman in making my main characters people  on the margins of the university, faculty in women’s and ethnic studies, but the biggest issue I faced in outlining the novel was how to write about their issues so that a general audience would want to read about them. I was aware that puzzles and unsolved crimes keep people turning pages and that within different mystery genres there were additional inducements to reader engagement. Hillerman, of course, uses elements of the thriller. Guns booming in the dark always kept me reading. But I wanted a different feel for my novel, which would have a lot to say about the value of caring community both for our lives and for political resistance, so I turned to another genre, that of the cozy.

Cozies are characteristically set in a small and valued community. By making one of the most valued communities in Oink that of a political coalition I gave this convention a political twist. Many cozies also involve food and come with recipes. The presence of food usually affirms pleasurable connection among the characters, a connection that is then extended outward to the reader through the inclusion of recipes. In Oink the same is true, although there the major connections being affirmed are among those resisting the university’s turn toward competition, self-interest, and profit. The inclusion of recipes pleasurably invites the reader into this alliance.

In Oink, moreover, as in the history on which it was based, gathering around food is one manifestation of a larger organizing impulse based upon “working on the relationship” through multiple acts of  friendship, love, and support. This is a strategy which black women had already employed to organize grassroots communities during the Civil Rights Movement and it reappears in Oink among the women characters in particular.

The cozy’s quirky, often, female sleuth and its characteristic humor are also present in Oink and serve a related purpose. According to J. K. Gibson-Graham, our repertory of tactics for getting people together should include playfulness and humor, which can toss us on to the terrain of new possibilities. By fusing playfulness and humor with a story of struggle, I aimed to attach a sense of optimism and possibility to political resistance.

By merging Hillerman’s focus on social issues and marginal points of view with the conventions of the cozy I could write about some of the difficulties for people on the margins in the university and in the nation while also immersing the reader in experiences of connectedness, love, humor, and pleasure, experiences which I hope will keep the reader reading and which I identify both as ways to live a more fully human life and as crucial to effective struggles for social change. In a way I hadn’t anticipated, the continuation of these values seems ever more critical to our time.

What do you see as the advantages of or the difficulties in using cozies or other kinds of mystery to address social issues?