From Panthers to Promise Keepers: Rethinking the Men’s Movement. Rowman and Littlefield, 2004.

From Panthers to Promise Keepers draws on intimate observations of the men and networks involved in what some have called “the men’s movement” and tells us why these networks mattered.  Focusing on the decades between 1950 and 2000, Judith Newton argues that while public, structural change is necessary for gender equality, getting men involved in efforts at social justice may well depend on their making changes with respect to feelings, unconscious fears, and anxieties.

“This profound, original, and engaging book leaps boldly and imaginatively across disciplinary fences to tackle the ultimate feminist riddle: what do men want? Drawing upon ethnography, literary criticism, psychoanalysis, and historical and sociological analysis, From Panthers to Promise Keepers plumbs the sources and meanings of contemporary men’s movements from urban guerillas and mythopoetic drum-beaters to charismatic Christians and queer activists. The mystifying terrain of contemporary masculinities has no more sage or sympathetic feminist oracle than Judith Newton.”  Judith Stacey, NYU

“Newton takes seriously recent calls by scholars to bring emotions back to the study of social movements. Her book should prove of substantial value for collections in social movements and gender studies. Highly recommended.” Choice

“An important and provocative book.”  Michael A. Messner, University of Southern California

“A pioneering work that connects African American social movements of the 1960s to men’s movements of the 1970s and 1980s. [Newton’s] approach is innovative, weaving together a sophisticated theoretical argument with personal narrative. This well-grounded book adds considerably to our knowledge of how ideas and ideologies spill over to other social movements.”   Belinda Robnett,  U.C. Irvine 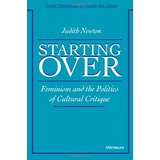 Starting Over: Feminism and the Politics of Cultural Critique. University of Michigan Press, 1994.

For more than a decade Judith Newton has been at the forefront of defining and promoting materialist feminist criticism. Starting Over brings together a selection of her essays that chart the establishment of feminist literary criticism in the academy and its relation to other forms of cultural criticism, including Marxist, post-Marxist, new historicist, and cultural materialist approaches, as well as cultural studies.

The essays in Starting Over have functioned as exemplars of interdisciplinary thinking, mapping out the ways in which reading strategies and the constructions of history, culture, identity, change, and agency in various materialist theories overlap, and the ways in which feminist-materialist work both draws upon, revises, and complicates the vision of nonfeminist materialist critiques. They are shaped by an awareness that public knowledge is always informed by the so-called private realm of familial and sexual relations and that cultural criticism must bring together investigations of daily behaviors, economic and social relations, and the dynamics of race, class, gender, and sexual struggle.

Starting Over is a brilliant synthesis of literature, history, anthropology, the many influential trends in contemporary theory, and the politics of feminism.

“Written over the course of the last decade or so, several of the essays collected in Judith Newton’s Starting Over can be classed among the most influential and incisive critiques of contemporary critical practice within or beyond Victorian studies. Reprinted here without much revision such essays as “History as Usual?” (1987) and “Historicisms New and Old” (1989) have been widely read and cited because they have revised the geneologies of Marxism and New Historicism from a feminist perspective, and thus challenged masculinist assumptions about who makes (and what counts as) history, theory, and politics.” Victorian Studies.

In this volume Judith Newton explores the changing ways in which women writers in nineteenth-century Britain responded to the inequities of power between men and women that their historical situation imposed.  In a series of carefully argued chapters on Fanny Burney’s Evelina, Jane Austen’s Pride and Prejudice, Charlotte Bronte’s Villette, and George Eliot’s The Mill on the Floss Newton places women’s literature of the period in a historical context and focuses on both the material conditions of women’s lives and the ideologies through which they experienced those conditions. 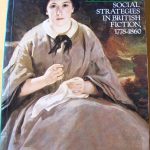 This lively and controversial collection of essays sets out to theorize and to practice a ‘materialist-feminist’ criticism of literature and culture. Such a criticism is based on the view that the material conditions in which men and women live are central to an understanding of culture and society. It emphasizes the relation of gender to other categories of analysis, such as race and class and considers the connection between ideology and cultural practice, and the ways in which all relations of power change with changing social and economic conditions. 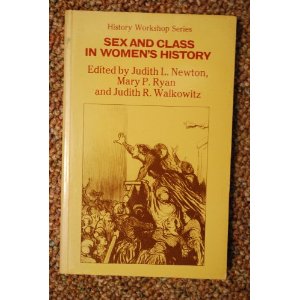 A classic collection of essays on the relations of class, sex, and gender in nineteenth-century Britain and America.