We’d reached the Social Science building—a stark configuration of concrete blocks and swooping, science-fiction ramps—where the meeting would take place. The “Deadly Planet,” as it was often called, was supposed, in some oblique fashion, to gesture toward the geography of California. Its large rectangles were ostensibly aligned with distant fields; its silver color was intended to suggest the Sierra Nevada mountains, and the

curving pathways that joined the blocks together were meant to replicate the paths of winding rivers. Fine on paper, but what about the human part of the natural world? 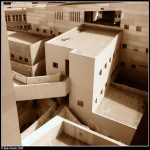 Haven Hall was a graceful, buff-colored building with a red tile roof and large windows that actually opened—it had been built in the 1920s before university buildings had been designed to hermetically seal in their occupants.

The administration building, Murk Hall, had been built in the 1960s, a five-story building with slit-like windows that vaguely recalled the computer punch cards of that era. 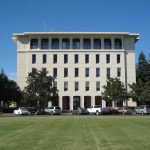 Like most on campus, I hadn’t the foggiest idea of what “Analytical Dynamics” meant, but I knew that it was housed in an impressive building, boasting an entire wall of reflective glass, and I knew that important visitors in math and science were frequently brought within its precincts. The Institute, now absorbing the blinding sun in its black and mirror-like wall, seemed a symbol of the future. 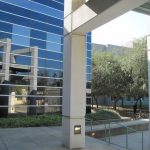 The Hog Barn, with its dull red siding, dirt-brown shingles, and marshy pens, seemed a vestige of the past, an emblem of a more modest time when Arbor State had been no more than a university farm with a long horizon. 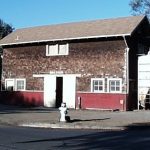